While all occupations carry their own set of hazards, some industries are more dangerous than others.  Construction work, for instance, has one of the highest fatality rates of all industries in the United States.  In an effort to help employers implement better safety standards and prevent wrongful death at worksites, the Occupational Safety and Health Administration, or OSHA, has identified the top safety hazards in the construction industry – the “Big Four” – which together, are responsible for about 90% of all construction deaths.

Perhaps it’s no surprise that accidental falls are a widespread safety issue at construction sites, because they are highly common throughout the United States in general.  According to the Centers for Disease Control and Prevention (CDC), over 2.5 million falls occur annually in the population aged 65 and older alone, causing hundreds of thousands of head injuries, brain injuries, and hip fractures each year.

While falls are common throughout all segments of the population, construction workers have a greater risk of sustaining serious or lethal injuries due to working from heights.  Scaffolds, stairs, ladders, walkways, and building exteriors all pose a risk if not properly secured.  According to OSHA data, over half of all construction-related deaths are caused by falls, which resulted in nearly 450 fatalities in 2007 – a number that equates to more than one death every day. 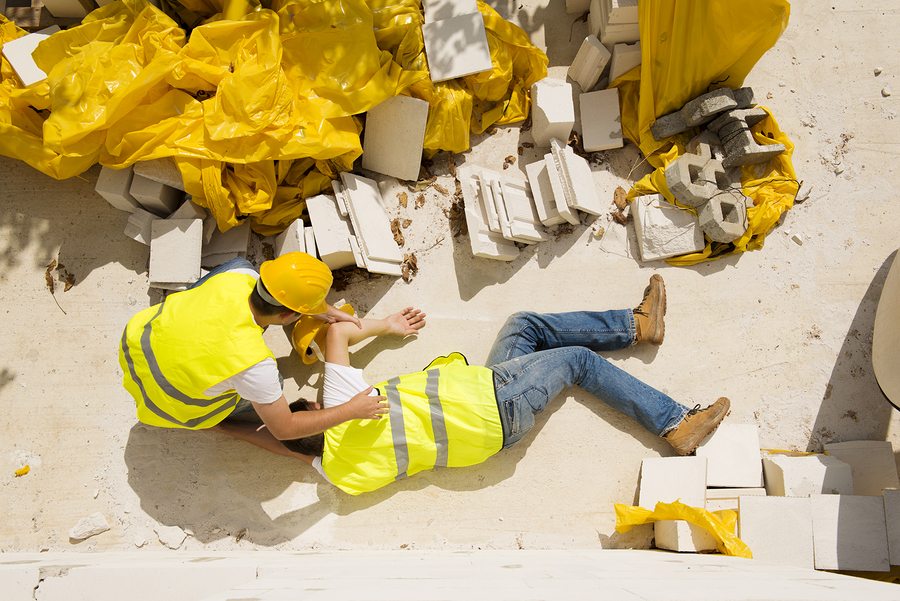 If your spouse or family member broke a bone or suffered other serious injuries after an accidental construction site fall, talk to our New York slip and fall injury lawyers about getting compensated.

In 2007, a total of 212 workers across all industries were electrocuted on the job.  More than half of them — 108 people — worked in the construction industry.  Some of the most common electrical hazards identified by OSHA were:

Even non-fatal shocks can have severe medical effects on the human body.  Depending on the strength of a current, which is measured in milliamperes, an electric shock can cause severe pain, electrical burns, nerve damage, and cardiac arrest (heart attack).  Death is possible at 50 milliamperes, and “likely” with 1,000 milliamperes or more.

Hazard #3: Being Caught Inside or Between Objects

Most caught-in accidents involve construction cranes or other pieces of heavy equipment, which can weigh hundreds of thousands of pounds.  Power tools which are missing their safety guards are another major hazard because they can easily snare on gloves or loose threads of fabric and pull the worker’s hand into the machine.

Even when they are survivable, these types of accidents frequently result in amputations and permanent disability, which can burden the worker with a lifetime of enormous medical costs and lost earnings.  Filing a claim or lawsuit can help compensate these expenses and provide greater financial security.

When workers fall, they can be seriously injured.  When pieces of equipment or building materials fall, they can cause serious injuries by striking the unexpecting workers below.  If the victim is not wearing a hard hat, or is wearing a hard hat which is defective or damaged, the resulting injury will be even more severe.  Powerful strikes to the head often result in traumatic brain injury (TBI), a potentially fatal type of injury which can have medical consequences like paralysis, respiratory problems, loss of physical sensation, incontinence, and difficulty forming new memories.

However, objects falling from heights are not the only threat to the safety of construction workers.  Object strikes can also be caused by flying or propelled objects, swinging objects, slipping objects, and even objects at ground level.

According to OSHA figures, object strikes were the second most common cause of death in the construction industry behind accidental falls, causing 311 fatalities in 2007 — about a quarter of construction-related deaths.

If you or one of your loved ones was injured at a construction site in New York City, your family may be entitled to compensation.  Call the personal injury lawyers of Sullivan & Galleshaw at (718) 843-0300 to learn more about your legal options in a free and private consultation.  We have more than 30 years of experience handling complex injury claims on behalf of injured New York City construction workers and their family members.